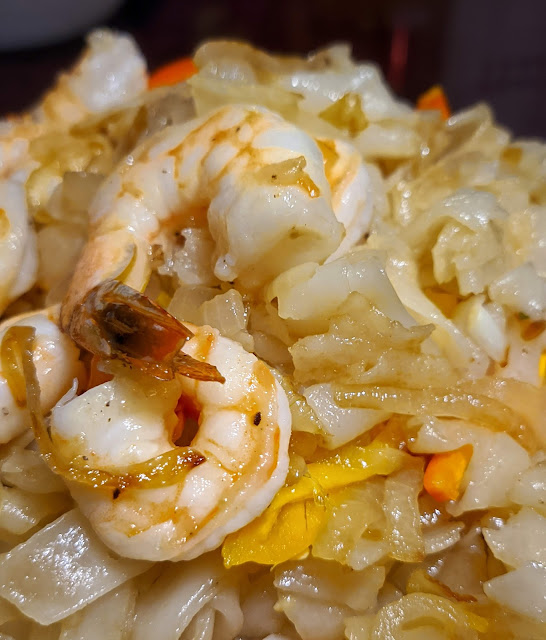 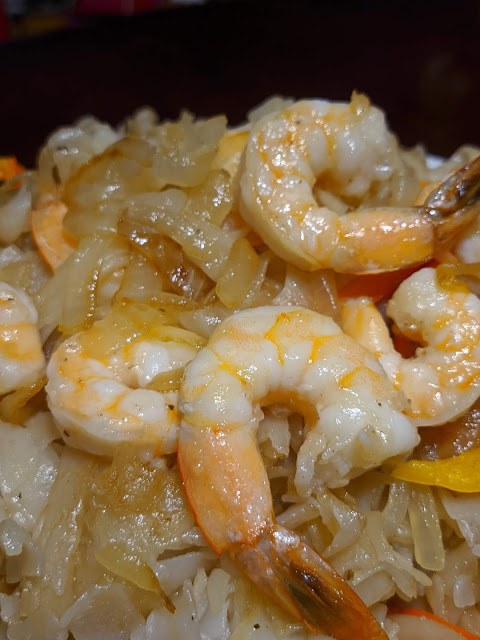 There are two types of Chow Ho Fun (stir-fried wide rice noodle): dry and wet.  Personally, I liked the formal better.  The ingredients include beef or shrimps, bean sprouts, onions, etc.  The pictures above clearly suggested I made the shrimp version of Chow Ho Fun.  I think I forgot about the bean sprouts and used yellow and red peppers instead.  LOL
The trick for a good Chow Ho Fun is to massage the rice noodle on a cutting board so that the noodles are separated as much as possible.  To help the shrimps to stay juicy and tender, cornstarch is added to them.  For details, please follow the instructions from the youtube video below. 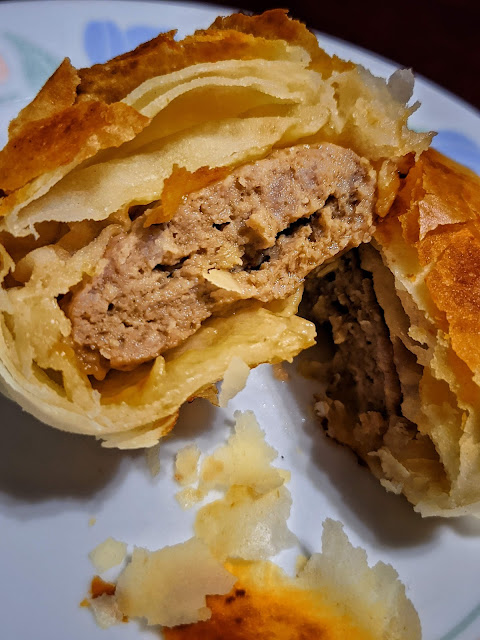 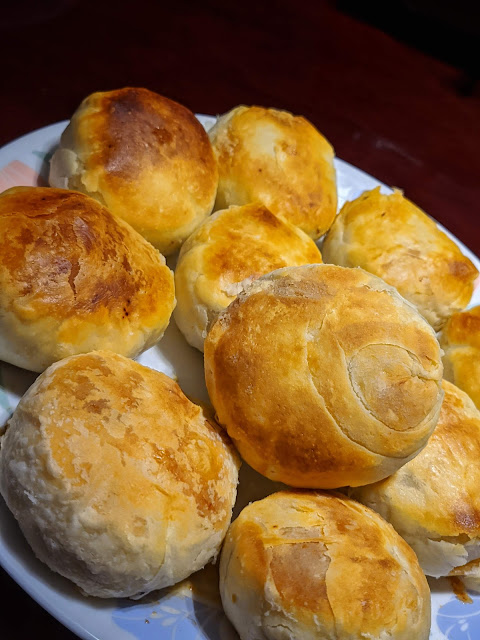 Last Tuesday, it was the Moon Festival.  To celebrate, I made a different type of mooncake: Shanghai Savory Mooncake.
Traditionally, the mooncakes taste very sweet because of the filings such as red bean paste, lotus seeds paste, etc.  Shanghai Savory Mooncakes, aka. Xian Rou Yue Bing, on the other hands, are filled with ground pork which taste salty.  Additionally, the shells are crisp and flaky.
I had to admit, they tastes weird at first since I expected sweet but tasted salty instead, a very unique experience nevertheless.
Youtube video:
Posted by weesan at 1:00 AM No comments: 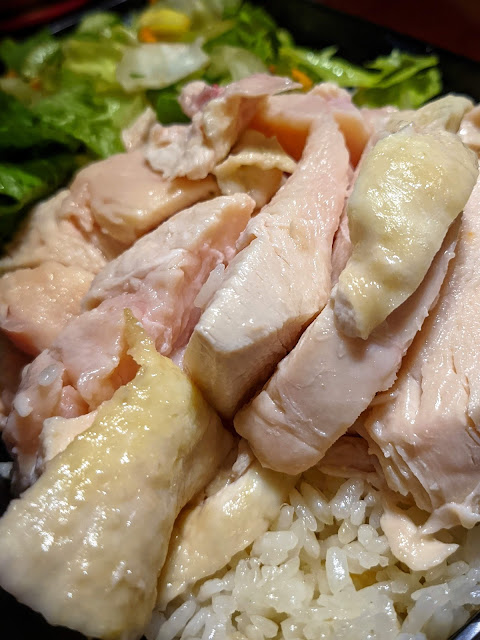 During pandemic, like many others, I started baking and cooking more often than not at home.  In the next few weeks, I'll try to blog and share the pictures of the dishes I'd made and the link to the youtube video(s) I learned it from.  For food pictures, I usually took them with my smart phone, an Samsung S20 5G, followed by post processing using Snapseed, all on the phone.
Just last weekend, I made the famous Hainanese Chicken Rice.  I based it off several videos but mainly the following two:
That was my first time trying to cook Hainanese Chicken Rice with a whole chicken from a supermarket,  certainly with many trials and errors.  For example, I had to simmer and cool the chicken twice because some part of the chicken breast looked a little pinkish.  Overall, it wasn't bad at all.  The chicken was very tender and juicy, and the rice was very fragrant and on the dry side, just the way I liked it.
Posted by weesan at 12:43 AM No comments:


Last night was known as Mid-Autumn Festival, also known as the Moon Festival or Mooncake Festival.  It is a traditional festival celebrated in China, Hong Kong, Taiwan,Vietnam, as well as by overseas Chinese communities.  The moon on Mid-Autumn Festival is supposed to be brighter and larger.  So, I decided to dust off my Olympus E-M10 Mark III with Panasonic 45-200mm lens to take a moon shot.

Walked through my garage, secured my camera on a tripod, aimed at the moon, zoomed the lens all the way with a hood on, turned on the 2x digital zoom, and I clicked.  Then, I clicked a couple more just in case.  After that, I came back home, loaded the image on GIMP, cropped, adjusted a few curves, and sharpened the image a little.  After that I posted the final image (left picture above) on SMS to a couple of friends.  Yes, we are old-school.  One of them was like: "What!!", "How?", "Seriously?", "This is so big!!", "So close" in consecutive replies, followed by a moon shot from the iPhone X (right picture above).   LOL.

These two pictures inspired me to write this blog after being dormant for more than 3 years.

Posted by weesan at 8:53 PM No comments: