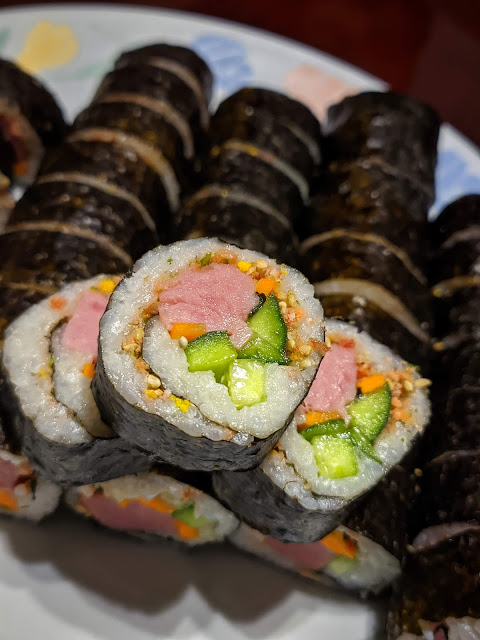 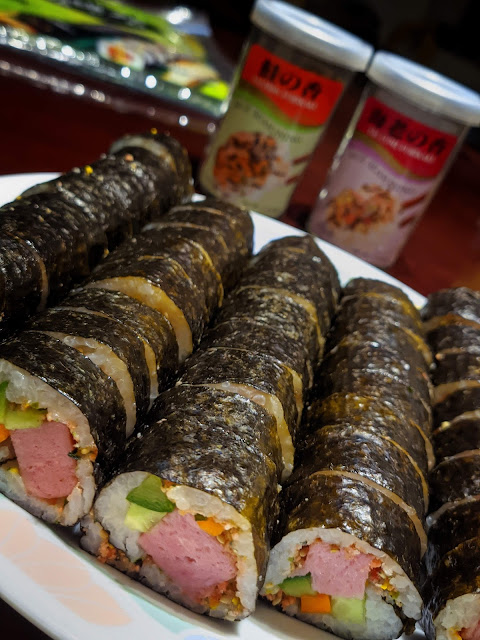 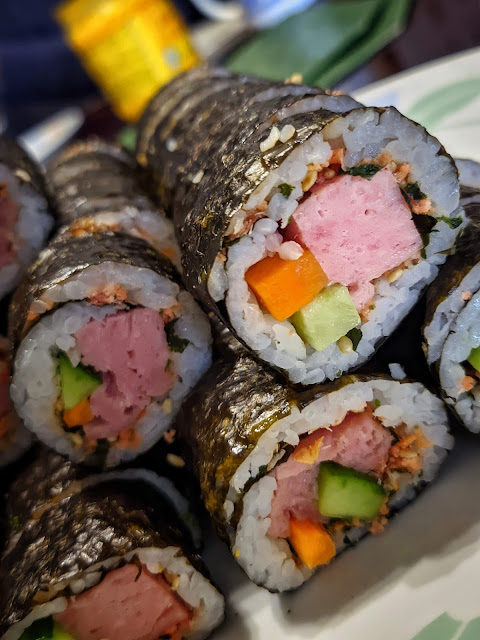 Sushi is a traditional Japanese dish made from rice with vinegar and sugar, paired with raw fish such as salmon or tuna.  Together with cucumber and carrots, the rice and fish are wrapped with a black seaweed sheet.  At least that's my understanding of sushi.  Of course, there are many different varieties and I just love them.

On the other hand, I also love spam.  You know, the ones come with metal cans, not those from the emails.  A couple decades ago, I was thinking: what if we could get the best out of both worlds?  Since, Spam Sushi was born!

For sushi, I don't need any youtube video to follow.  It was a long time ago, I might have learned it from a friend verbally and known it by heart since.  I don't care if I'm using the short grain rice; I usually use whatever rice I have in my kitchen.  In my case, usually it means the long one.  I used to use a special vinegar for sushi, now, as long as it's light color vinegar, I'd use it.  When the rice is cooked, while still hot, I would spread some vinegar onto the rice, stir well and balance the sourness with some white sugar.  Beforehand, I would slice the spam, cucumber and carrots into strips.  Last but not least, I would buy some rice seasoning and seaweed sheets online or from a local asian supermarket.

To assembly a sushi roll, I use a bamboo rolling mat.  First, I take a black seaweed sheet out from the package, lay it on top of the bamboo rolling mat.  Then, I spread the rice evenly and thinly on the seaweed sheet followed by a generous layer of the rice seasoning.  After that, I lay two strips of spam head-to-toe because the  seaweed sheet is usually twice as long, followed by two strips of cucumber and carrot, also head-to-toe.  As a last step, I roll the bamboo mat such that all the ingredients are tightly packed within the seaweed sheet.  After that, I repeat the same steps until I run out of the ingredients or patience, whichever comes sooner.

To serve, I usually wet both sides of the knife before cutting the sushi into pieces, and I would repeat wetting the knife after a few cuts.  This is to prevent the rice from sticking on the knife and ruin the subsequent cuts.  For best presentation, I usually trim out the edge pieces of the each sushi roll and make  those disappear entirely in my stomach :)